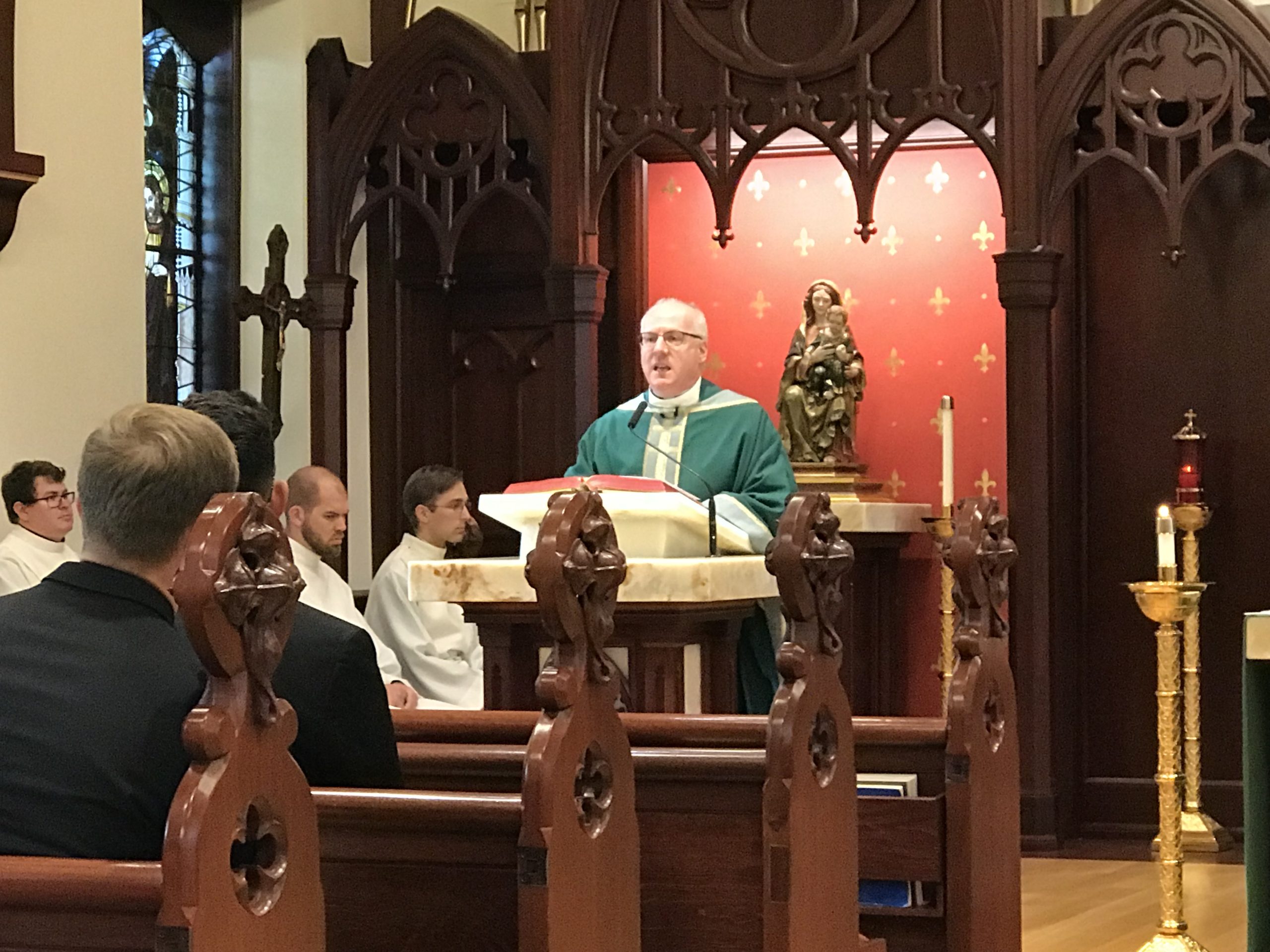 Reverend Monsignor Joseph R. Reilly gives the homily during mass Sept. 24 at the Chapel of Christ the Good Shepherd. The chapel houses refurbished pews and stained glass windows that were at Queen of Angels Church in Newark where NCC Founder Monsignor William J. Linder was pastor.

Immaculate Conception Seminary School of Theology at Seton Hall University held a mass Sept. 24 celebrating New Community Founder Monsignor William J. Linder and parishioners of the now closed Queen of Angels Church. The Chapel of Christ the Good Shepherd at the school houses refurbished pews and stained glass windows that were part of the now demolished Queen of Angels Church.

Monsignor Linder attended Immaculate Conception Seminary School and was ordained in 1963. Shortly after his ordination, he was assigned to Queen of Angels as the pastor. He was part of that church community when he founded New Community Corporation with many of the parishioners involved.

Queen of Angels parishioners, New Community staff members and seminarians gathered for the evening mass at the chapel in South Orange, which was led by Reverend Monsignor Joseph R. Reilly.

“The mass at Immaculate Conception Seminary was beautiful as was the renovation of the chapel,” said New Community CEO Richard Rohrman. “It was moving that the seminary was able to save the stained glass windows and pews from Queen of Angels and so lovingly restore them, and comforting to know that the memory of the parish and the memory of Monsignor Linder would live on in such an appropriate place.”

Reverend Monsignor Reilly began his homily talking about the journey the items now in the chapel have taken.

“If these pews could talk, what they’d tell us, I believe, would be a beautiful and inspiring story of faith, of courage and of witness to Jesus Christ,” he said. “New generations of men now preparing to serve the church as priests — as generous, dedicated, holy priests like Monsignor Bill Linder — now find their place in them.”

“The chapel, with its ornately refurbished pews and gorgeous, stained glass windows from the demolished Queen of Angels, was indeed a perfect setting. The service was made even more special by the presence of the many young seminarians and priests,” he said. “It was indeed a reminder that Monsignor Linder continues to live in us and the objects he touched.”

It was comforting for former Queen of Angels parishioners to see the items they knew so well and held dear being used again in a place of worship.

“Seeing the stained glass windows and pews from Queen of Angels, which were donated to the seminary chapel, brought tears to my eyes, but also a peaceful feeling,” said Cecilia Faulks, who attended Queen of Angels Church and also was the first employee for New Community Corporation. “It was a wonderful celebration, enhanced by the voices of the seminarians singing the songs of praise during mass.”