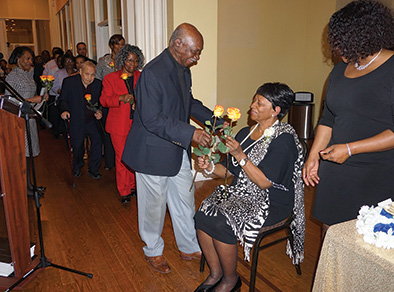 NCC Board President Dr. A. Zachary Yamba presents NCC Chief of Staff Kathy Spivey with a rose during her retirement celebration April 25. Many colleagues, friends and family members handed Spivey roses as part of the event.

New Community has wished a fond farewell to Chief of Staff Kathy Spivey, who retired April 30 after 26 years with the organization. Family, friends and NCC colleagues celebrated Spivey’s retirement April 25 at St. Joseph Plaza.
Spivey will be greatly missed at New Community, but has decided to return to Ohio to be closer to family.
“Kathy’s retirement has been coming for a while but is real now. Kathy is more than a 25-plus year critical piece of NCC’s progress,” said New Community CEO Richard Rohrman. “She was there with Monsignor Linder to help steer NCC through the ups and the downs. She was there to help me in my transition into the CEO role and weather a few of our own ups and downs. The organization will miss her guidance and I will certainly miss her always spot-on observations. At the same time I am very excited for her heading home into the arms of a loving family. Thank you, Kathy. You earned this many times over.”
Spivey first came to New Community as a volunteer after meeting Founder Monsignor William J. Linder while both served on the Governor’s Commission on Employment and Training. Spivey had been the Manager of Corporate Personnel Labor Relations for McDonald’s Corporation and Monsignor Linder spoke with her about business operations often. He asked her to join the NCC staff a year and a half after she began volunteering. She accepted and became the Director of Staff Development and Training in January 1993. In 1996, she was promoted to Chief of Staff, a title she held until her retirement.
“For 26 years, New Community had a loyal, dedicated, valuable and dependable employee. I applaud her for her contributions to NCC for which she will be missed,” said NCC Board Member and Outreach Coordinator Madge Wilson. “As Kathy Spivey embarks on her new career, which is retirement, I wish her every happiness and joy that she will encounter.”
Working with Monsignor Linder was a highlight of Spivey’s NCC career.
“Probably my favorite part was working under Monsignor. It was an education that all the money in the world could not have paid for. He was a master teacher,” she said.
Spivey also enjoyed working with her colleagues and the clients of New Community. She developed lifelong relationships over the years.
“I don’t have sisters or daughters,” Spivey said. “But I have so many adopted daughters here at New Community and adopted grandchildren here at New Community. And I’ve got some mothers in the buildings.”
More than 100 individuals came to celebrate Spivey’s long career at New Community April 25. NCC Board President Dr. A. Zachary Yamba talked about how Spivey dedicated herself to the organization and its mission.
“Throughout all these years, she’s really been a credit to New Community. She loves New Community, she loves the people who are part of New Community and she loves the city,” Yamba said. “Thank you very much for being that go-to person when we had to do something. Thank you for your years of service. Godspeed and we all wish you the best.”
NCC Board Member Diane Johnson helped organize the celebration and served as the emcee. She talked about the qualities that make Spivey special and how she impacted the organization.
“You will be missed from New Community. You will be missed from the city of Newark and from New Jersey,” Johnson said. “But you’re God’s special flower and we want you to know that your wisdom, your love, your strength and your grace shall never be forgotten. Your journey through the lives and adventures of New Community was not a journey in vain.”
During her time at New Community, Spivey had the opportunity to travel internationally and welcome visitors from other countries to NCC. She worked closely with Monsignor Linder and the Board of Directors. She was instrumental in the development of many new buildings during her tenure, including Hudson Senior, Orange Senior, the NCC Health Care Complex and Better Life. New Community also ventured into home ownership opportunities during her employment with Community Hills and Bergen Estates.
Spivey’s advice to employees is to stay focused on the mission of New Community: to help residents of inner cities improve the quality of their lives to reflect individual God-given dignity and personal achievement.
“The work for us is about the people we are commissioned to serve,” Spivey said. “I share with potential new employees that if you’re coming here just for a paycheck, you’re in the wrong place.”
Download Best WordPress Themes Free Download
Download Best WordPress Themes Free Download
Free Download WordPress Themes
Premium WordPress Themes Download
free download udemy course
download coolpad firmware
Premium WordPress Themes Download
free download udemy paid course
Tags: , , Bergen Estates, Better Life, Chief of Staff, Community Hills, Diane Johnson, Dr. A. Zachary Yamba, Hudson Senior, Kathy Spivey, Madge Wilson, Monsignor Linder, Monsignor William J. Linder, NCC, NCC Health Care Complex, New Community, Newark, Ohio, Orange Senior, Richard Rohrman, St. Joseph Plaza