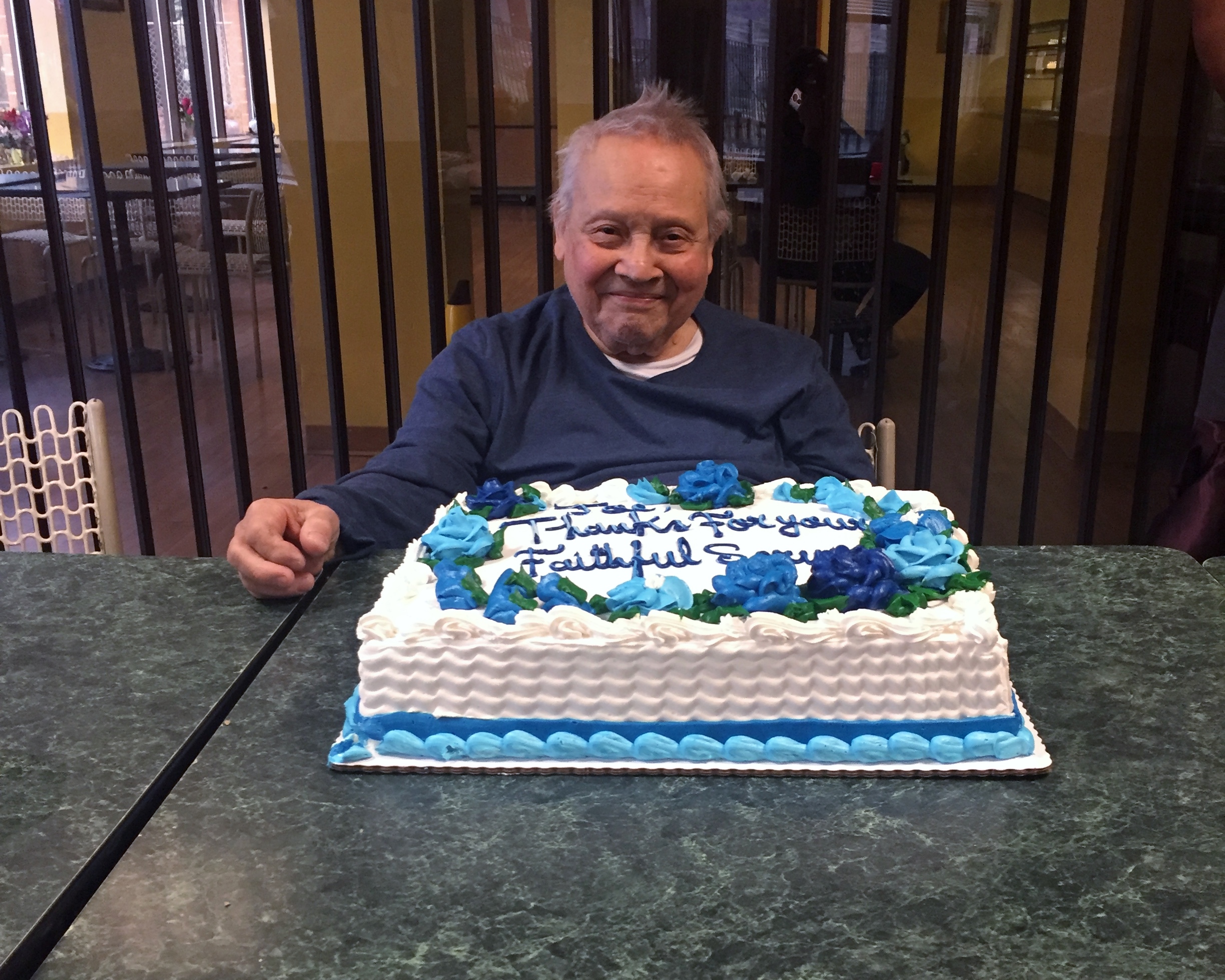 Long-time New Community Executive Chef Joe Rodriguez has retired after nearly 33 years with the organization.
Rodriguez first came to New Community to be the chef to oversee the opening of the Priory Restaurant. At the time, Rodriguez’s daughter worked as an attorney for New Community and she told NCC Founder Monsignor William J. Linder that her father was a chef. Monsignor Linder met with Rodriguez and after three interviews, offered him the job.
Prior to joining New Community, Rodriguez worked at for-profit restaurants and said he didn’t understand the concept of a nonprofit organization.
“[Monsignor Linder] explained it to me. If we make any money, then we just put it back into the community. And I kind of liked the idea,” Rodriguez said. “So that’s why I came to work for him. And that’s why I stayed.”
Rodriguez not only stayed, but remained committed to his work while at New Community.
“It isn’t often that you see the dedication that Joe Rodriguez brought to NCC every day for almost 33 years. I never heard a harsh word come out of Joe’s mouth,” said New Community CEO Richard Rohrman. “He was truly part of the NCC fabric. Every meal that Joe produced was important. He will be missed by all of us but will have more time to spend with his loving family.”
Once hired, Rodriguez said he had 30 days to open the Priory Restaurant, which was challenging but he pulled it off. The day before the restaurant was slated to open, Monsignor Linder brought employees to order anything they wanted from the menu.
“That was the last test,” Rodriguez said.
NCC Board Member and Outreach Coordinator Madge Wilson said it was clear Rodriguez was special as soon as he came on board.
“When Joe Rodriguez joined the NCC family back in the 1980s, I knew that we had a gem; a loyal and dedicated person that we could trust in working for New Community Corporation as a chef,” she said. “My only wish is that we could find more dedicated people to work as Joe exemplified a love and dedication to New Community.”
After working at the Priory Restaurant for about five years, Rodriguez was transferred to Extended Care. Once there, he oversaw the meals prepared for the nursing home residents in addition to preparing meals for several schools NCC served at the time and NCC special events.
“His dedication to the residents of Extended Care and New Community in general is unquestionable,” said Extended Care Administrator Veronica Onwunaka. “Joe never left us because the weather was bad, because he’s coming from a far distance, he had a sick wife he was managing or he himself didn’t feel well. Joe would get in here. Because he wanted to make sure that the residents were fed the proper meal.”
Rodriguez got into the food industry out of necessity.
“When I came to America way back in the ’50s, there were no jobs,” he said. He was doing a bit of work at a hotel when a chance encounter led to his career.
“While I was having a beer, the guy that was sitting next to me, who I had never seen before, said to me, ‘Are you working?’ I said, ‘Not really.’ So he said, ‘You want to work for me? You see that diner over there? That’s my diner. If you want to, you come.’ And I worked for that man for many years,” Rodriguez said.
He didn’t attend culinary school but learned his craft by working. He said God blessed him with the ability to be able to recreate a dish he sees made one time, which also helped him excel.
Rodriguez worked long past the age when most people retire. At age 84, he said he still gets up around 4 a.m. because he’s used to being an early riser. His shift started at 5 a.m. When there were special events, he would stay through to the end, which could be quite late into the evening. He said he never required too much sleep though.
“Even if I go to bed at 2 o’clock, I can get up,” he said.
Rodriguez lives in a ranch house in Garwood. His wife passed away four years ago so he lives alone. He has three daughters and nine grandchildren. Two of his daughters live in Westfield and one lives in Flanders. He has a sister in Puerto Rico.
Rodriguez enjoyed his time working at NCC.
“I think New Community is a challenging place to work but an excellent place to work,” he said.
Tags: Executive Chef, Extended Care, Flanders, Garwood, Joe Rodriguez, Madge Wilson, Monsignor Linder, Monsignor William J. Linder, NCC, New Community, New Community Corporation, New Community Executive Chef, Priory Restaurant, Puerto Rico, Richard Rohrman, Veronica Onwunaka, Westfield