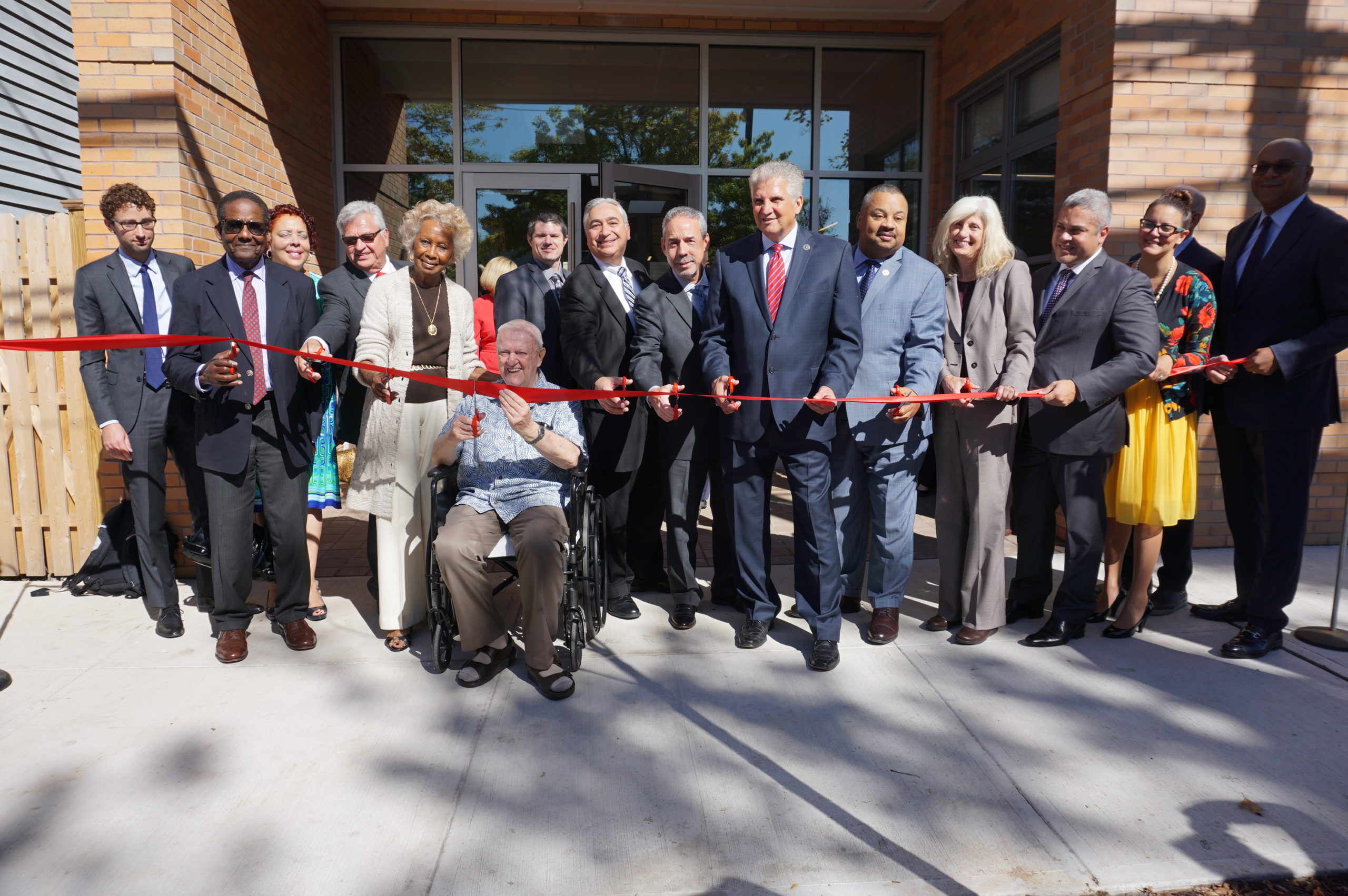 Those involved with A Better Life, New Community Corporation's new supportive housing facility for the chronically homeless, participate in a ribbon cutting in front of the building at 101 Fourteenth Ave. in Newark Oct. 18.

Called A Better Life, the facility will house chronically homeless individuals, many who suffer from mental illness. They will live in studio apartments at 101 Fourteenth Ave. in Newark that include a private bathroom that is handicapped accessible and a kitchen area with a stovetop, microwave and refrigerator. A Better Life also has an engagement center, library, dining area, laundry room and common areas. Residents will have access to supportive services on site.

The grand opening was a culmination of six years of work. The $8 million project was the vision of New Community Corporation Founder Monsignor William J. Linder.
At the grand opening, Linder said A Better Life is a beautiful facility for residents.

CEO Richard Rohrman said throughout its 50 years, New Community has always helped the most vulnerable and housing the chronically homeless is another piece of the puzzle.

“This is a group that requires our help. It requires much more than this. This can only just be the very beginning. The issue that we’re facing of homelessness is much larger than this,” Rohrman said. “We’re hoping that by doing this it can be replicated with more and more of this in the city and elsewhere.”

Essex County Executive Joseph DiVincenzo said the county has more than 3,000 homeless people. “So that’s a very, very high number. Being part of the New Community family and being part of this, people that are here will be involved in all the other programs and services that are offered so it’s giving them a second chance and that’s what we should be doing,” he said.

Congressman Donald Payne Jr. said he was delighted to lend his support. “It’s not radical to propose that everyone have a home,” he said. “Our veterans, our citizens are in need and it’s incumbent upon us to do everything we can to eradicate that need.”

Federal Home Loan Bank of New York Community Investment Research and Outreach Specialist Brian Loeb said A Better Life meets people where they are to help them. “These 20 of the most vulnerable people in Newark are going to have a bed. And more than a bed, a place to call home,” he said.

Red Stone Equity Partners Managing Director of Acquisitions Richard Roberts said the solution to homelessness is simple. “It is supportive housing. It is the bricks and mortar with the services on site. Not around the corner, not down the block, not downtown,” he said. “And if we muster the resources and the political will to commit more money, time and energy to projects like this, a problem which harms so many people could be solved.”

New Jersey Housing and Mortgage Finance Agency Executive Director Anthony Marchetta said the Christie and Obama administrations were involved in the completion of A Better Life. “We got half of the resources for this facility from the Sandy Special Needs Housing Trust Fund. That’s a combination of both the state and the federal government,” he said.

University Hospital’s emergency care system will refer individuals for placement at A Better Life. Rutgers University Behavioral Health Care will be providing 24/7 supervision and support for the residents.

Rosemarie Rosati, who recently retired as COO of Rutgers University Behavioral Health Care and was heavily involved in the planning and completion of A Better Life, said, “This program represents the best types of services that I worked to develop over my 38-year career in mental health.”

She said the building has been specially designed to serve the chronically homeless. “The services are tailored to engage folks because it’s difficult to just move off the streets to a structured program,” she said.

A Better Life is a joint project led by New Community Corporation in collaboration with a number of funders and partnering agencies: New Jersey Housing and Mortgage Finance Agency, an affiliate of the New Jersey Department of Community Affairs; Red Stone Equity Partners; Essex County HOME Program; Newark HOME Program; U.S. Department of Housing and Urban Development; and the Federal Home Loan Bank of New York. Chelsea Construction Company, a subsidiary of New Community, managed the project and Claremont Construction served as the general contractor. The facility was designed by lwdmr Architects.