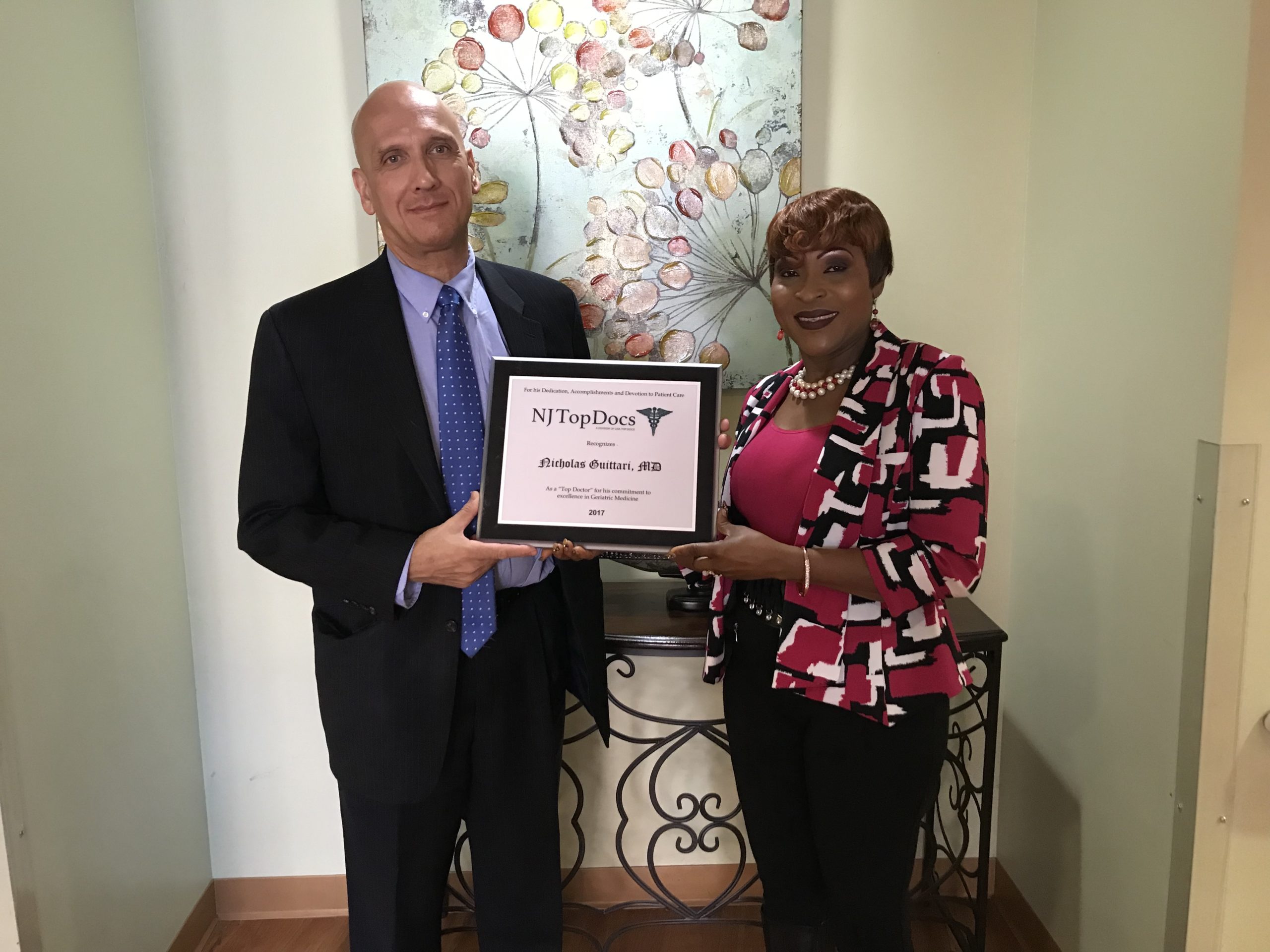 Dr. Nicholas Guittari, Extended Care medical director, and Veronica Onwunaka, administrator at Extended Care and director of Health and Social Services for New Community, show off the plaque designating Guittari as a Top Doctor for 2017.

Dr. Nicholas Guittari, the medical director of New Community Extended Care, has been named a Top Doctor for 2017 for his commitment to excellence in geriatric medicine by NJ Top Docs, a division of USA Top Docs.
Guittari has always been interested in geriatrics. He grew up with three of his four grandparents having Alzheimer’s disease, which got him interested in the field.
He got his bachelor’s degree from St. Peter’s University in Jersey City and attended New Jersey Medical School. He also completed a two-year fellowship at New York University School of Medicine.
Guittari began practicing medicine in 1991 at Newark Beth Israel Medical Center and started a private practice in 1997.
New Community Founder Monsignor William J. Linder recommended Guittari for the position of medical director at Extended Care. Guittari was his doctor and Linder was impressed with him.
“He takes every patient seriously. He’s an excellent doctor and such an excellent person,” Linder said. “I’m very pleased my doctor is getting the recognition that he deserves.”
Guittari spends three to four days a week at Extended Care, overseeing the care provided to residents. He’s sometimes at the facility on weekends and is available as needed.
In addition to being the Extended Care medical director, Guittari leads the geriatric department at Newark Beth Israel Medical Center and is also the facility’s director of hospice.
He very much enjoys his work. His favorite part?
“The old people. They’re the best,” he said. “They have a different perspective on life. They teach you time is finite and to make the most of what you have. Things aren’t always guaranteed.”
Veronica Onwunaka, administrator at Extended Care and director of Health and Social Services for New Community, said Guittari is a special medical professional.
“If you need an angel as a doctor, Dr. Nicholas Guittari is the one to ask for. He is a special gift from heaven, one of a kind. I am honored to have him as our medical director,” she said.
Guittari lives in Essex County with his wife and three daughters, ages 14, 17 and 19. He met his wife, a nurse, at Newark Beth Israel. They’ve been married 21 years and work alongside each other often.
NJ Top Docs invites doctors to complete a qualification questionnaire and then an internal group of members reviews applications anonymously and determines who will be designated a Top Doctor.
Tags: Essex County, Extended Care, geriatric medicine, Jersey City, Monsignor William J. Linder, New Community, New Community Extended Care, New Jersey Medical School, New York University School of Medicine, Newark Beth Israel, Newark Beth Israel Medical Center, Nicholas Guittari, NJ Top Docs, Top Doctor, USA Top Docs, Veronica Onwunaka