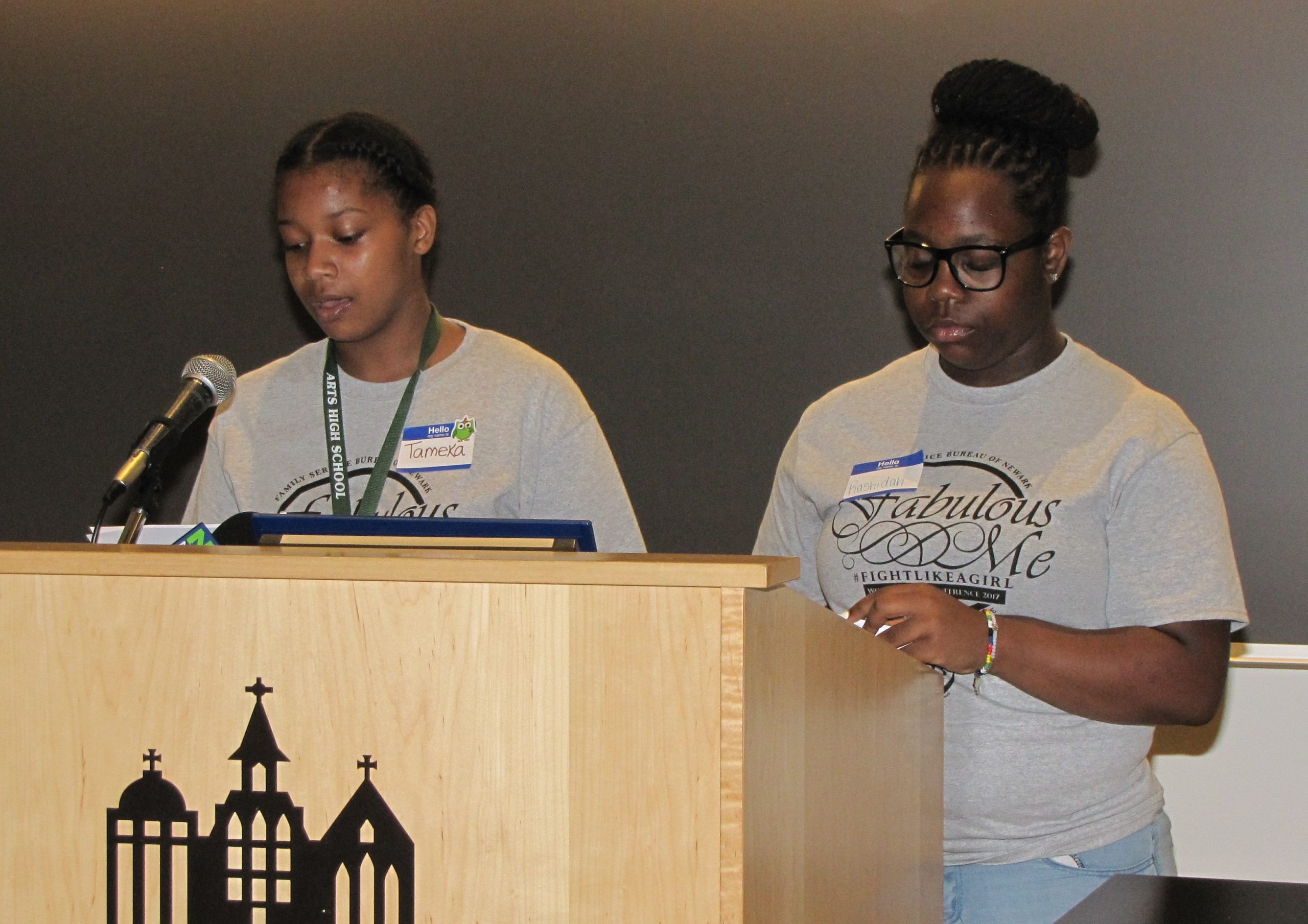 About 220 girls ages 11 to 17 attended this year’s Fabulous Me: Celebration of Womanhood conference hosted by the Family Service Bureau of Newark, an affiliate of New Community Corporation. This year’s theme was #FightLikeAGirl with a fitting keynote speaker: five-time world and international boxing champion Mia St. John.
St. John talked about her struggles growing up as a Mexican-American, battling alcohol and drug addiction, dealing with obsessive compulsive disorder and the loss of her son to suicide. She told the girls in the audience, “No matter what obstacles you have in life, you can overcome them.”
Her daughter Paris St. John also spoke at the conference, telling the girls that they don’t have to be perfect and they should follow their hearts and be themselves.
The speakers resonated with attendees.
“My favorite part was the boxer and the boxer’s daughter talking about expressing yourself,” said Tameka Jackson-Bright, a 15-year-old attendee from Newark Arts High School who also served as a Junior Female Ambassador, helping plan and execute the conference.
Fellow 15-year-old Junior Female Ambassador Rashidah Babb of Hillside High School has attended the Fabulous Me conference since she was 12. This year the message she took away was, “To be yourself and love who you are.”
Family Service Bureau Executive Director Manuela Garcia said there are several purposes for Fabulous Me. “The goal for our 2017 Womanhood Conference is to promote, empower, teach and have girls understand the importance of growing up comfortable in today’s society. Also at the same time learn the values of leadership, independence, creativity, prevention and learn additional skills to be a successful woman in today’s world and be able to #FightLikeAGirl,” she said.
In addition to the speeches, girls participated in breakout sessions that covered topics such as cyberbullying, STDs, teen pregnancy and domestic violence.
To end the conference, members of Rutgers SCREAM Theater used improvisation to showcase dating violence in various forms. The performance was interactive, with attendees asking questions to the actors while they were in character.
“The idea behind this is to promote bonding of young females across socioeconomic class and race. There are lot more similarities than differences,” said New Community Chief of Health and Human Services Arti Kakkar. “Fabulous Me brings 200-plus girls together under one roof to share ideas and learn leadership skills.”
Tags: #FightLikeAGirl, 2017 Fabulous Me Conference, Arti Kakkar, cyberbullying, domestic violence, Fabulous Me, Family Service Bureau of Newark, Hillside High School, Junior Female Ambassador, Manuela Garcia, Mia St. John, New Community Corporation, Newark, Newark Arts High School, Paris St. John, Rashidah Babb, Rutgers SCREAM Theater, STDs, Tameka Jackson-Bright, teen pregnancy