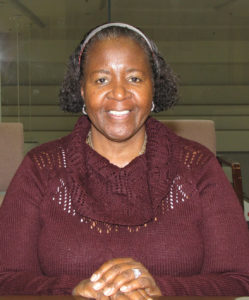 Voila Thomas said she scored big when the Financial Opportunity Center at New Community helped her improve her credit rating.

“I was so happy that it happened because it was holding me back,” said Thomas, who went from subprime to prime borrower status based on her improved score.

Financial Coach Victor Silva was giving a presentation at her workplace when Thomas happened to overhear his talk on her way over to the copy machine. She was dealing with some credit problems, so she decided to stop and listen.

Thomas’ credit score had suffered because of a nearly $1,000 debt that a collections agency claimed that Thomas owed for purchasing an iPhone from Verizon Wireless. Thomas said that she never purchased an iPhone (she uses an Android smartphone) and suspected that the fraudulent charge occurred during a period where she had lost her pocketbook. She tried dealing directly with Verizon, to no avail.

“I didn’t know the steps to take,” Thomas said. Then the collection agency came knocking.

“Working with Viola gave me an opportunity to understand her debt and the burdens she encountered when receiving those unwanted phone calls and unsolicited letters demanding her to pay,” Silva said. He worked with Thomas to draft and submit validation dispute letters to the collection agency, which were sent via certified mail. The collection agency had to prove that the debt belonged to Thomas and because the agency was unable to prove such, the item was taken off her credit report. Thomas also sent letters to Verizon and the three major credit rating agencies.

Meanwhile, Silva advised her to pay off minor debts and helped her to secure a credit card from Dress Barn.

“It was rewarding to coach Viola with managing and validating her debt, which resulted in a sizable amount of debt being removed from her credit report. As a result, Viola’s credit score increased, making her more financially sound,” Silva said.

Thomas noted that at one point, after her initial meeting with Silva, she had decided to visit another financial assistance center where she was charged $10 and left without any real help. “I should have stuck with Mr. Silva. I would still have $10 in my pocket,” she said.

Since her credit score jumped in June 2016, Thomas, 56, of Newark, said she was able to refinance her car payment and save more than $200 a month. Thomas said she periodically emails Silva to continue working on improving her financial stability.

“Nobody did for me what Mr. Silva did,” she said. 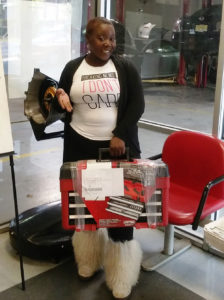 When Satiney Myers visited the Financial Opportunity Center at New Community, she was saddled with more than $20,000 in student loan debt.

What was even more overwhelming was the fact that she didn’t have a plan to address the debt. Financial Coach Victor Silva was ready to help. Silva worked with Myers to create a budget that cut out unnecessary spending habits that he described as “spending leaks.”

Myers had recently completed the Automotive Training Program at the New Community Workforce Development Center in January 2016 and was earning a steady income working at Valvoline in East Hanover. She was hired in March 2016.

“Satiney was serious about developing a personal budget,” Silva said. “Through our collective work, Satiney was able to apply a portion of her income towards her savings account.”

In the past, Myers had allowed a credit card to be closed, which had a negative impact on her credit score. At the Financial Opportunity Center, she received a referral to the Intersect Fund, a credit-building program that assists individuals with establishing credit and was ultimately able to improve her credit score.

“It gave me a lot of tools,” Myers said.

Also, Myers was referred to Volunteer Lawyers For Justice, a free legal service that assisted her with debt-related legal issues and helped prevent her from being subject to legal garnishments or liens against her wages or bank account.

Previously, Myers worked a string of temp jobs for about four years and had taken out student loans to pay for training programs to learn to become a dental assistant and medical assistant. Neither of the programs panned out for Myers and, in the meantime, she became homeless and also struggled with managing a rocky relationship with her teenage daughter.

“Satiney was determined to pay off her student loans. Building a financial strategy became her priority, so she reached out to the Financial Opportunity Center for help with identifying how to increase her savings and eliminate unnecessary spending habits,” Silva said.

Myers, 30, of Newark, expressed gratitude to Silva and the Financial Opportunity Center at New Community for helping her achieve financial stability by tackling her student debt and other credit issues.

“I feel like he went the extra mile,” she said of Silva.

Myers benefited from the integrated services provided by the Financial Opportunity Center and the New Community Workforce Development Center. Once she completed the automotive program, she worked with the Center’s job developer, Rudolph Drakeford, who connected her with job opportunities. Myers said that went on about 30 interviews in two months, thanks to Drakeford who helped with everything from bus tickets and directions to the interview sites. The Workforce Development Center even provided her with interview attire, Myers noted.

Meanwhile, Myers has advanced in her career in the automotive industry and was promoted to the position of senior technician in August 2016, five months after being hired at Valvoline. She said her goal is to become a master technician and one day open her own shop.

The Financial Opportunity Center is located at 274 South Orange Ave. in Newark. For more information, call 973-824-6484.