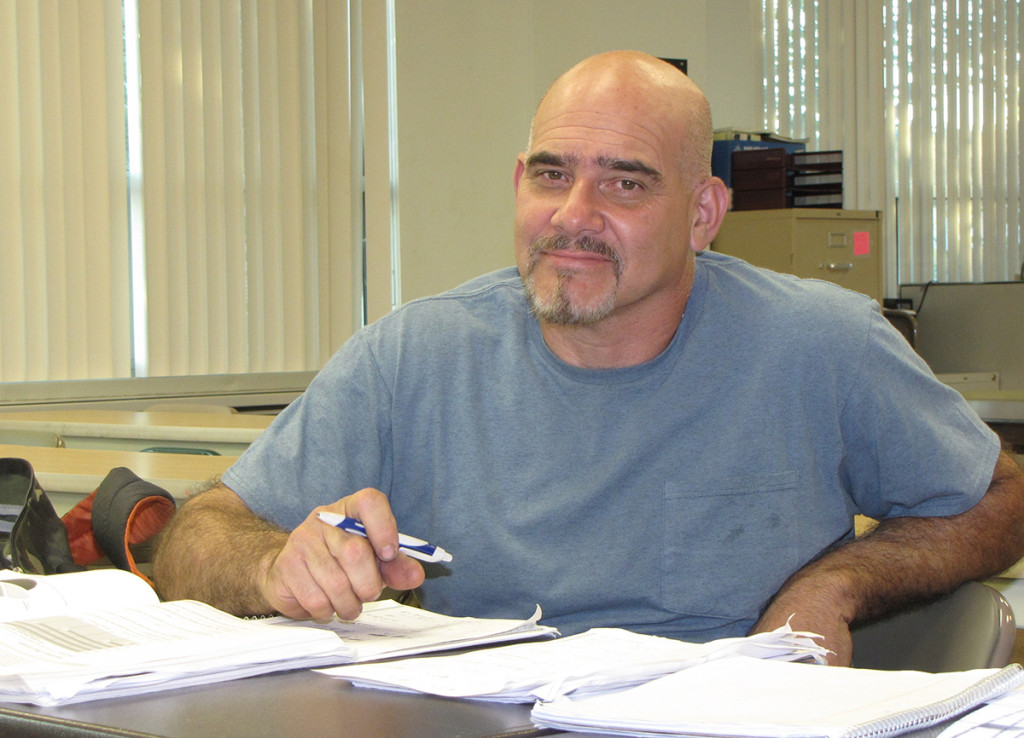 Arsenio Montero Jr. watched his twin daughters graduate from Rutgers-Newark earlier this year and says they have motivated him to earn his GED.

Tackling the GED exam isn’t easy and Arsenio Montero Jr. has tried it before in his younger years.

What’s the difference this time? His twin daughters, who recently graduated from college, have taken on the role as his two biggest cheerleaders.

Montero, 54, is currently taking Level 1 GED classes offered by New Community Adult Learning Center and says he was motivated to return to the classroom by his 23-year-old daughters, Jasleen Vega and Jacelene Vega. (If you’re wondering, Montero says their names are pronounced exactly the same.) “It was their mother’s idea not mine. I got nothing to do with that,” he added with a laugh.

The twins are not his biological daughters, said Montero, who raised them from age 4 with his now wife, Arleen, the girls’ biological mother.

The twins see Montero’s renewed attempt at earning his GED as an opportunity to support their father. “He took that step into actually raising us and being there for us,” said Jasleen, who along with her sister, graduated from Rutgers-Newark, both with degrees in criminal justice and psychology, this past spring.

However it was actually back when the twins graduated from Newark’s Arts High School that they began prodding Montero about going back to school. “We kept on encouraging him,” Jacelene said. “It has like a double effect.”

After watching his daughters receive their college diplomas, Montero, who works full-time as a private contractor, enrolled in a GED class at NCC, which is held at the Workforce Development Center at 201 Bergen St. in Newark.  He says it’s not easy to balance work and class but added, “You gotta find time.”

The owner of A & A Twin Glass in Newark, Montero says his goal after earning his GED is working towards an Occupational Safety and Health Administration (OSHA) certification. “When you misspell things, it can be a little embarrassing,” Montero said, adding that he’s brushing up on both his writing and math. “It’s a chance to say I finally did it,” he said.

Born and raised in Newark, Montero says he dropped out after eleventh grade and then became addicted to heroin as a young man. He hit rock bottom after his then girlfriend died after battling drug addiction. Montero soon found himself homeless and sleeping in his car.

His life drastically turned around at age 34, after he sought drug counseling at a faith-based rehabilitation program and became a Christian. He now attends a church in Newark called Temple Rock and says he’s been clean for 18 years. In addition to his twin daughters, Montero has a 34-year-old son, also Arsenio, who served in the Marine Corps and now lives in California.

Instructor Roslyn Skyles says that Montero is fearless in the classroom and helps “break the ice” for students who are timid about participating. His enthusiasm also shows at home.

“He actually comes home and says, ‘We did our fractions,’” Jacelene said.

“We truly believe in finishing what we start,” added Jasleen. “We’re really proud of him and with God, all things are possible.”

Our mission is to help residents of inner cities improve the quality of their lives to reflect individual God-given dignity and personal achievement. Click the link to download our 2018-2019 brochure!