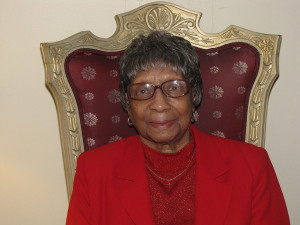 For nearly half a century, Elnora Mitchell worked as a housekeeper and cook for one of Newark’s most prominent African-American families, the Whighams.

“I got the job through an employment agency,” explained Mitchell, 83, who now lives  in the senior building known as New Community Associates in Newark.  “I was doing live-in domestic work at the time for a man and his wife in South Orange and was growing tired of that and wanted a change. The employment agency told me I would be working for a family right above their funeral home,” she continued.  “It turned out to be the best job I ever had. The Whighams treated me just like family,” said Mitchell, who lived in an apartment on Dr. Martin Luther King Jr. Blvd. (formerly High Street). owned by the family well past her retirement in 1992.

Carolyn Whigham, who now runs the funeral home started by her father, Charles L. Whigham in 1946, said she was about 7 and her brother, 12, when Mitchell came to work for the family at the original funeral home site across the street from its current location. She described Mitchell as a kindhearted woman with a strong faith in God who is also just  “a wonderful cook.”

“You want some good cakes and pies…she was not only a housekeeper, but she truly became a confidant to myself and my brother,” Carolyn Whigham said. “As young kids growing up, she would be the one to sit down with us if we had a conflict with our parents and explain how we would be able to better appreciate what they were saying later in life. She brought the word and the spirit of the Lord into our house.”

A native of Spring Hope, N.C., Mitchell has resided at New Community Associates since 2004 and is a floor captain who regularly checks on her neighbors. Two years ago, she won second place in the NCC Senior Bake-Off Contest for a delicious pineapple cake she entered.

“I am very happy here. I like my apartment and the staff and it’s like being around family here. Anything you ask them to help you with, they will do it. We also have round-the-clock security, which makes me feel very good,” said Mitchell, a longtime member of Newark’s Promised Land Baptist Church, where she sits on the church “Mother’s” board.